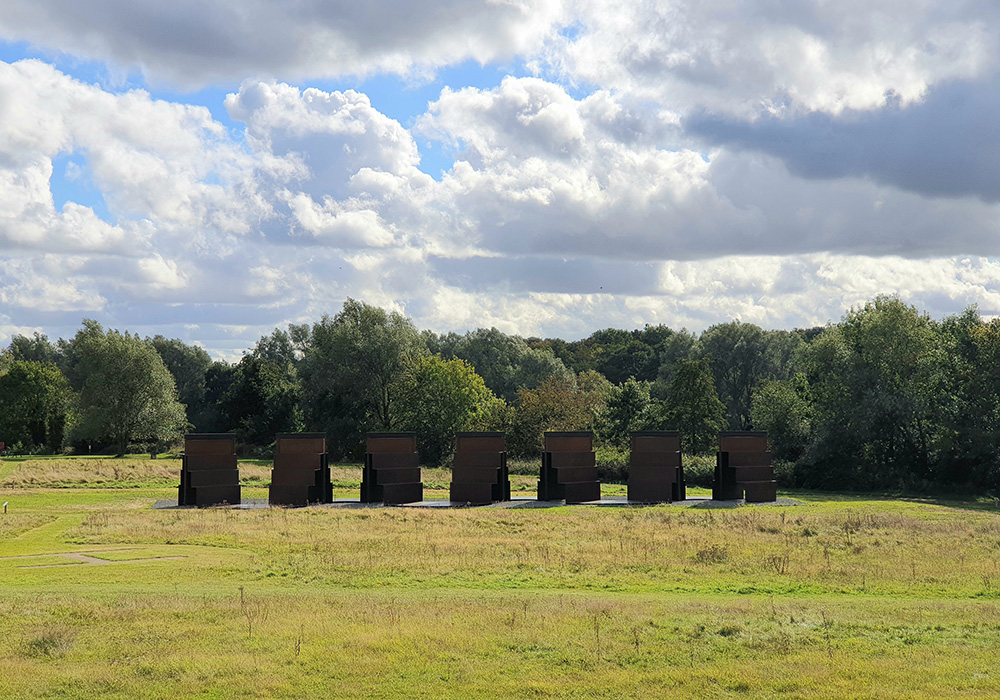 The Sainsbury Centre welcomes a new addition to their Sculpture Park, at the University of East Anglia in Norwich.

Goodwood Steps (1996) by Anthony Caro is monumental, spanning over 35 metres in length and reaching over 3 metres in height. Occupying the space between art and architecture, the work is fabricated in steel and consists of seven stepped ziggurat sections, joined by floor plates that form sweeping arcs. The surface of the sculpture has oxidised to a rich, earthy iron colour, a finish familiar to many other works by Caro, including Table Sculpture CCCLXXI (1977) in the Sainsbury Centre’s collection.

One of Caro’s most significant works, Goodwood Steps was shown in its first iteration in 1994 at Dean Clough Mill, Halifax. In 1996, Caro re-imagined the ziggurat forms as a new freestanding sculpture. This work was first installed at the Cass Foundation at Goodwood, from where its title originates. Later installations include Navy Pier in Chicago, USA in 1998 and Chatsworth House, Derbyshire in 2012. 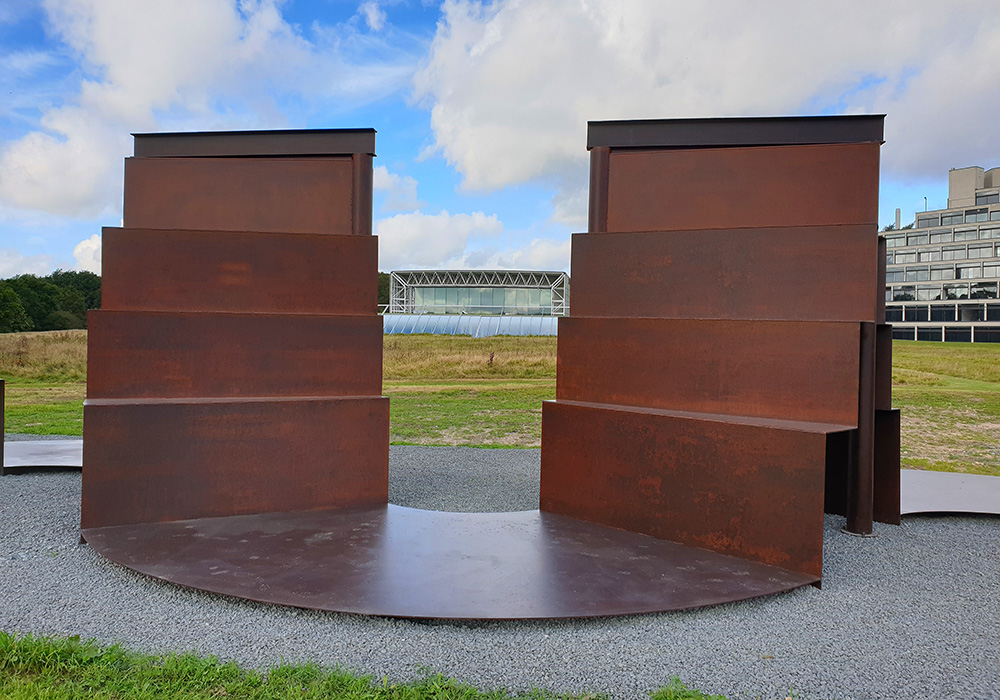 Lauded as the greatest British sculptor of his generation, Anthony Caro (1924-2013) is internationally recognised as one of the masters of modern sculpture, and is best known for his large-scale metal assemblages made from found industrial objects.

Having studied at the Royal Academy School in the early 1950’s, Caro began his career working as a studio assistant to Henry Moore. He went on to redefine the concept of sculpture in terms of materials, form and scale and by taking sculpture off the plinth. He came to public attention in 1963 with a show at the Whitechapel Art Gallery in London, where he exhibited large, brightly painted, abstract sculptures placed directly on the ground, which changed the way that spectators interact with his work. This was a radical departure and influenced a generation, most notably in Britain with the so-called New Generation
sculptors such as Phillip King.

Caro’s role as a teacher at St Martin’s School of Art in London (1953 -1981) was instrumental in the dissemination of his ideas and thoughts about the possibilities of sculpture. His innovative work and teaching would help to foster the growing importance of three-dimensional art, and what became known as sculpture in the expanded field. 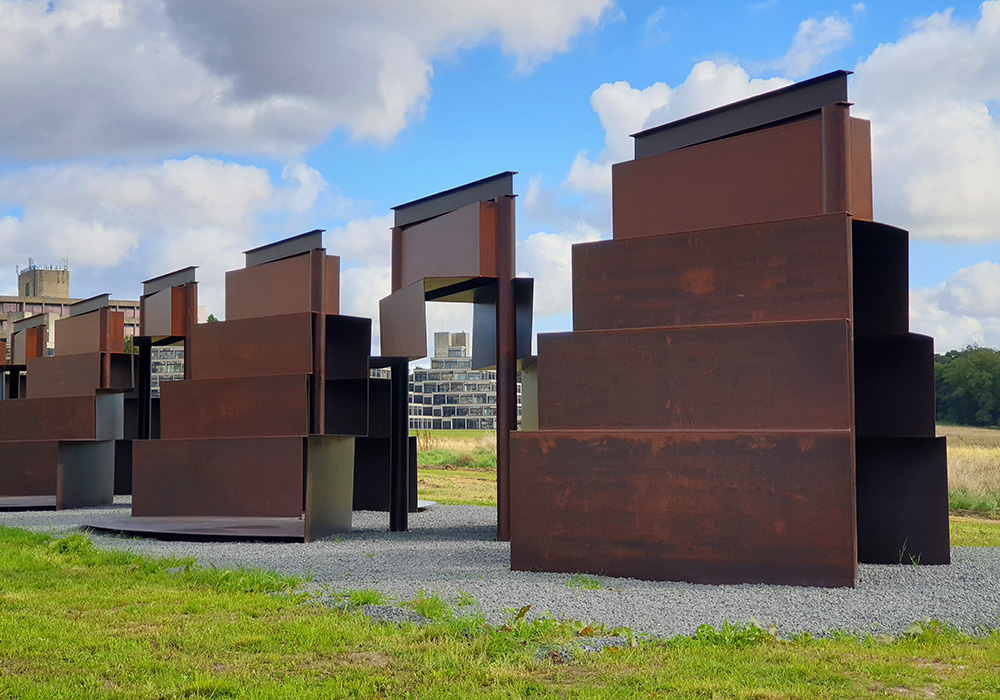 Positioned in proximity to Denys Lasdun’s famous ziggurats at the University of East Anglia, Goodwood Steps creates a powerful dialogue with the striking modernist campus. Lasdun saw the ziggurat form as the perfect architectural solution to working in the softly undulating landscape of East Anglia, where his student accommodation blocks sit comfortably in the sloping river valley.

Likewise, Caro found the ‘stepped’ form reduced the potential dominance of working at scale and complemented, rather than overpowered its environment. Before he died, Caro expressed a desire for the work to be shown on the campus. Caro had personal links to Norwich, his family had originated from the city and in the early 1970s he received an honorary doctorate from the University of East Anglia. 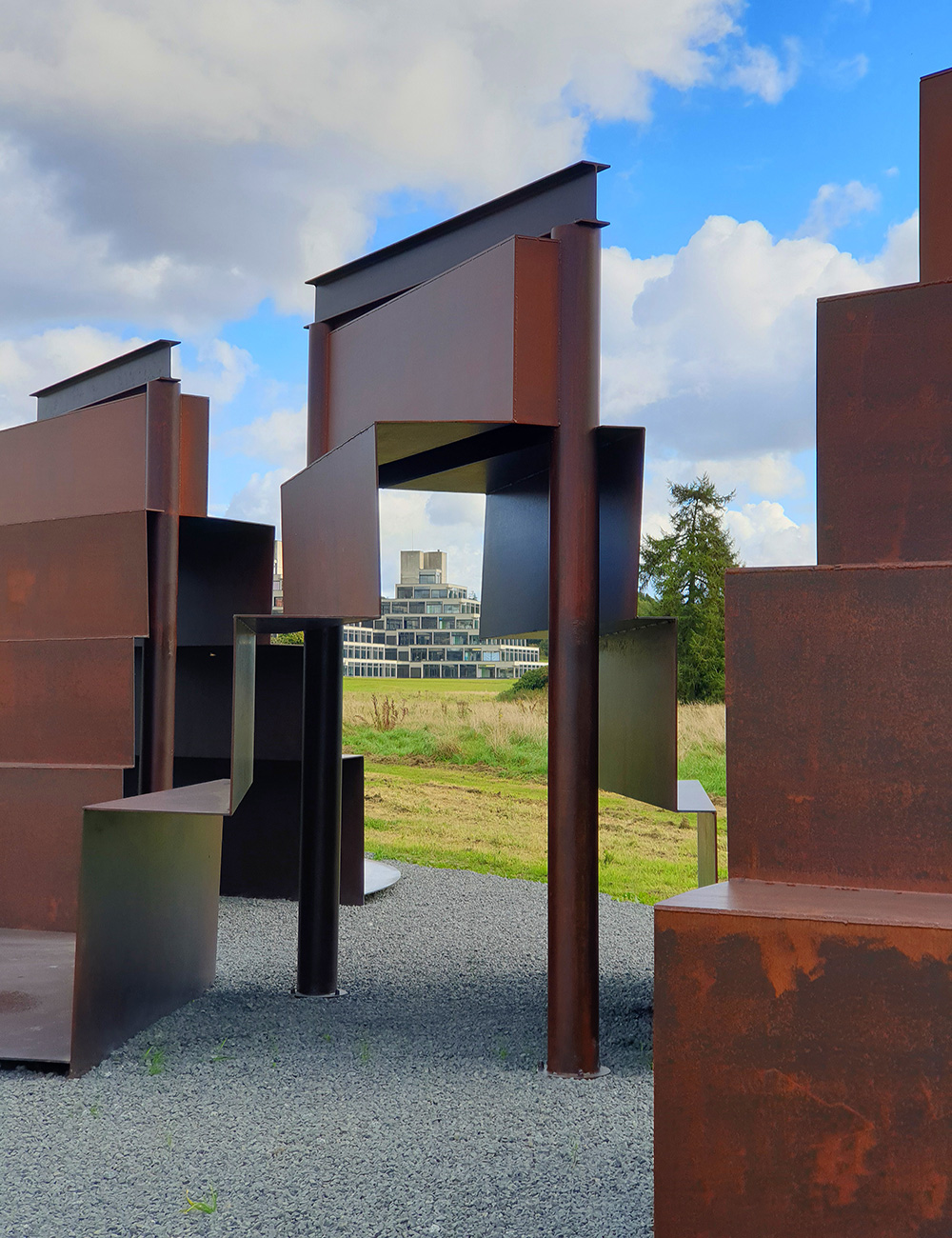 Goodwood Steps is on display at the Sainsbury Centre Sculpture Park now and will remain on loan for three years.

This is a wonderful addition to the Sculpture Park. We walk around the UEA quite a lot and have been watching Goodwood Steps being installed; it was amazing to finally get up close to this structure and walk between and underneath the ziggurats. You should definitely take the time to visit and experience this sculpture for yourselves.

The Sculpture Park, which is fast becoming one of the most important sculpture parks in the country and includes works by other notable artists including Henry Moore, Elisabeth Frink, Antony Gormley, Liliane Lijn, Lynn Chadwick, Phillip King, John Davies and Laurence Edwards (Supported by John Talbot and public funding from Arts Council England).

Entry to the Sculpture Park is FREE and un-ticketed, all ages and dog walkers are welcome.

For more information about the Sculpture Park and to download free trail maps for adults and families, visit sainsburycentre.ac.uk/sculpture-park/ 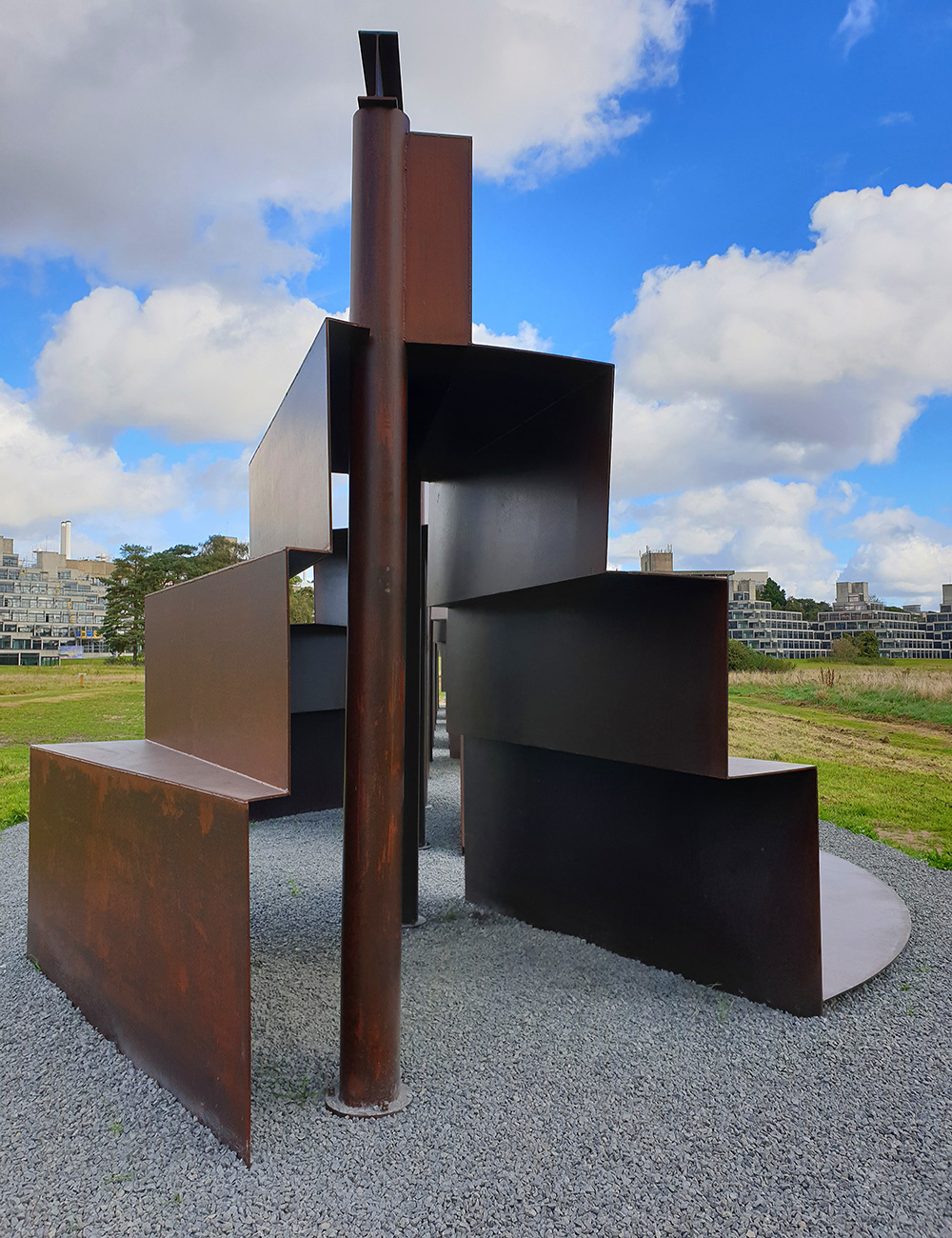 Planning a day out in Norwich? Other places to visit.