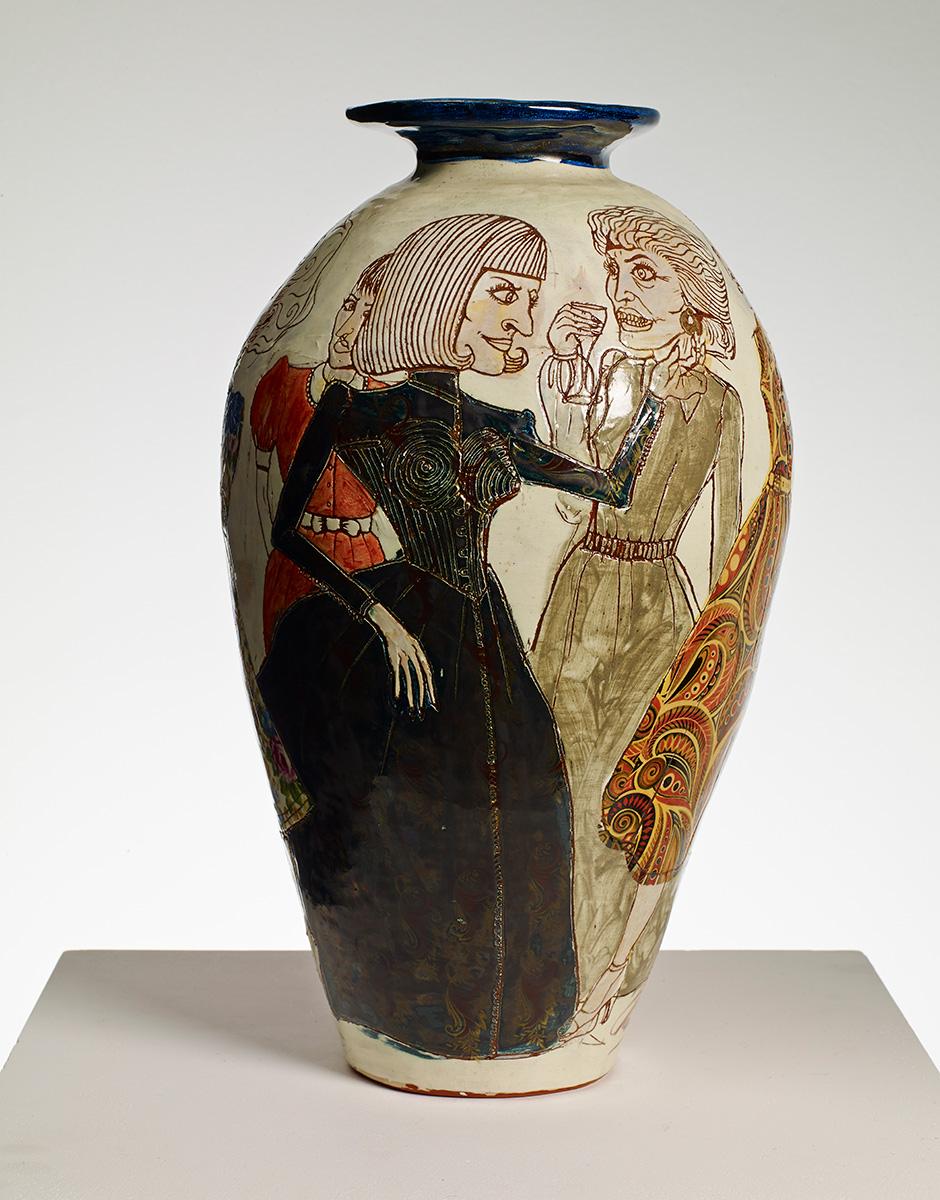 A new exhibition at the Sainsbury Centre. Grayson Perry: The Pre-Therapy Years.

The Sainsbury Centre presents a new exhibition that surveys for the first time Grayson Perry’s earliest forays into the art world, re-introducing the explosive and creative works made during his formative years between 1982 and 1994. His groundbreaking pots of this period have been collected together for the first time following a hugely successful appeal to the public in 2018 by Perry and The Holburne Museum in Bath, where this exhibition first opened in January 2020. 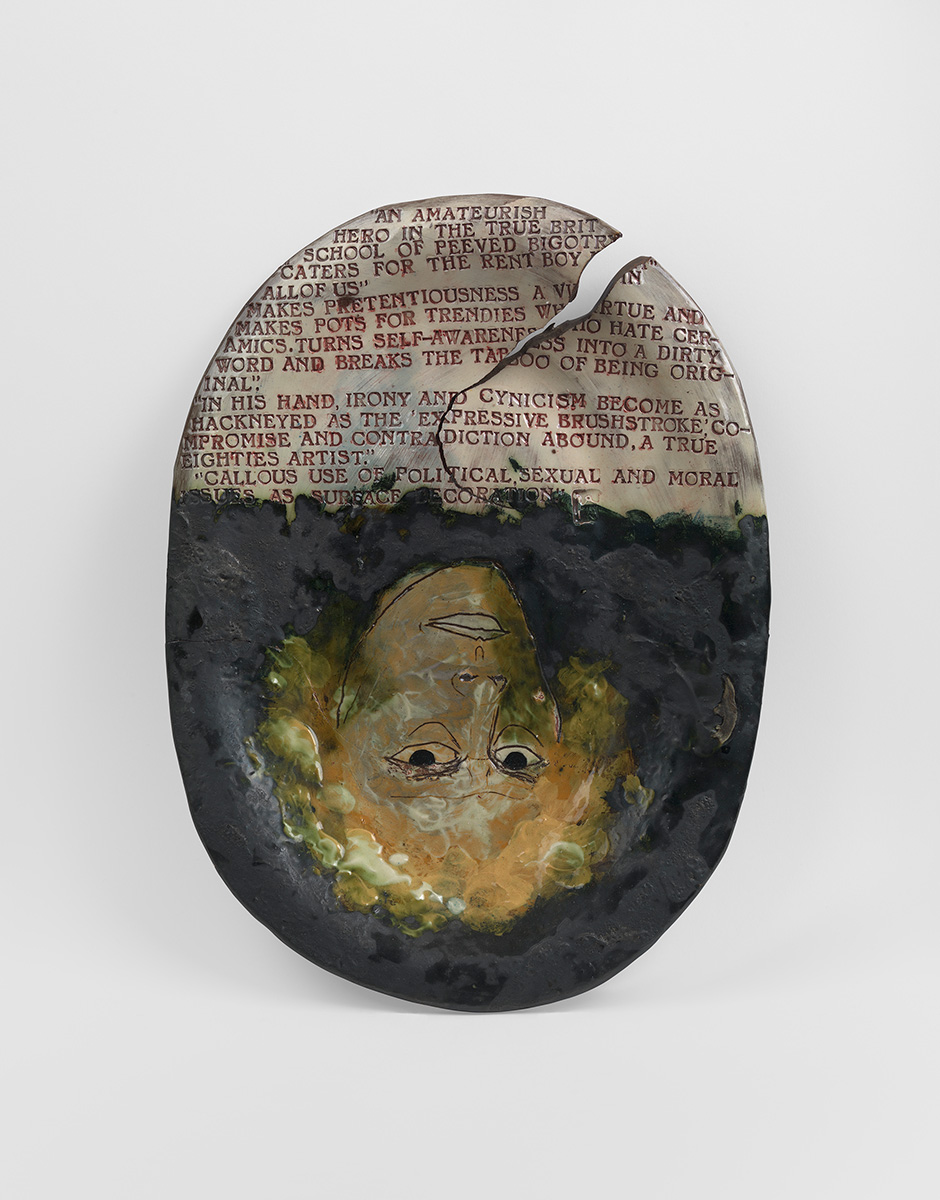 Today, Perry enjoys a reputation bordering on National Treasure status by virtue of his distinctive tapestry, collage and ceramic works that often explore themes of gender, identity and social class, as well as his remarkable work as a witty social commentator on television and in print.

The exhibition was conceived by Dr Chris Stephens, Director of the Holburne. He said, “I was delighted when Grayson liked the idea of bringing together his earliest works as they had never been displayed together before. The first step was to find out where we could find these pieces, so we made a public appeal and were overwhelmed by the response from across the country. We were thrilled with the range of irreverent, witty, and downright explicit artworks that came together to form the show. It is a fantastic celebration of Grayson’s work.”

It was when looking through the extraordinary and varied selection of artworks that Grayson remarked that seeing the works again was a reminder of his “pre-therapy years.” 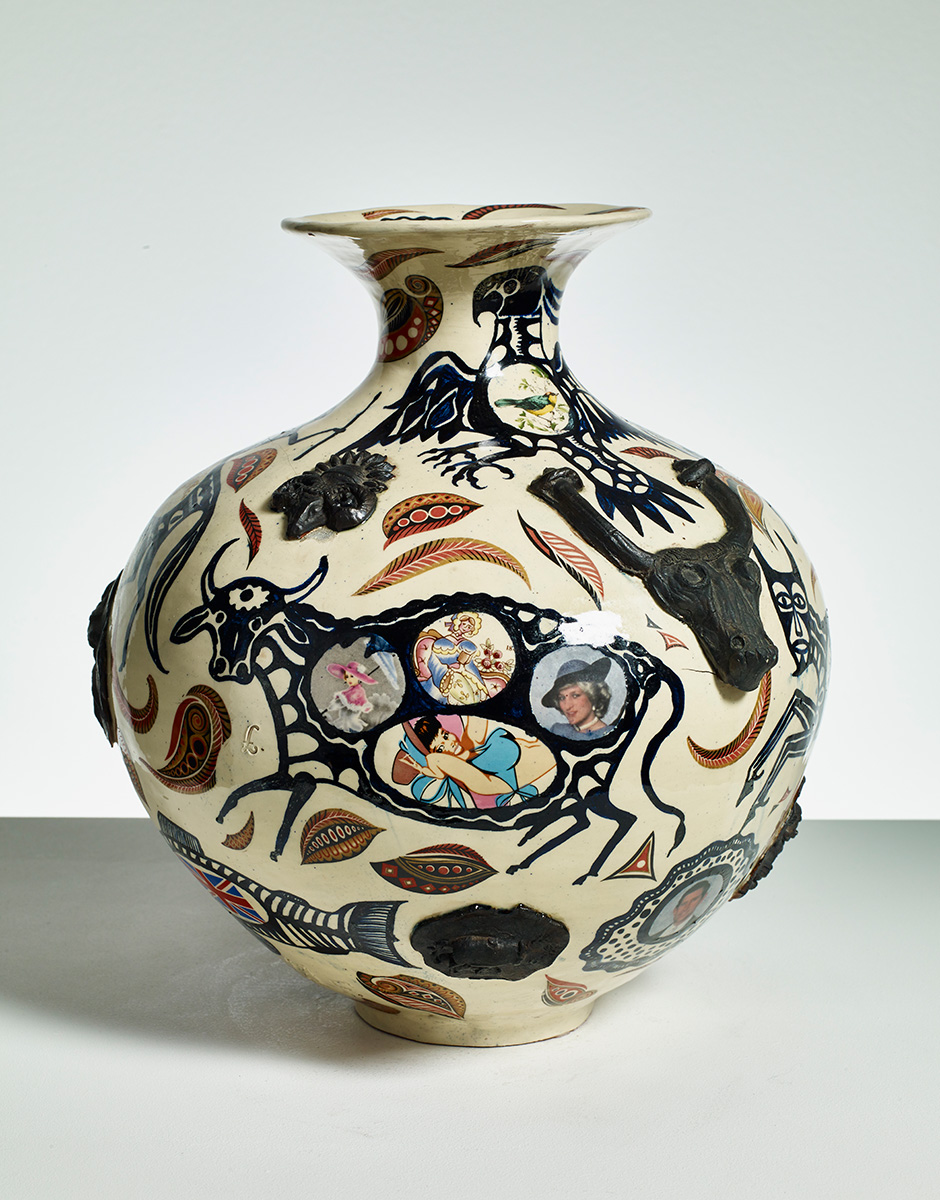 The exhibition will display the earliest works (pots, plates and sculptures) that first made Perry’s name, and will shine a light on his experimentation and exploration of the potential of pottery to address radical issues and human stories. For art lovers, Grayson Perry: The Pre-Therapy Years represents a unique
opportunity to enjoy the artist’s clever, playful and politically-engaged perspective on the world through a number of pieces, many of which have not been seen in public since they were first exhibited. Often challenging and explicit, these works reveal the early development of Perry’s distinctive voice that has established him as one of the most compelling commentators on contemporary society. 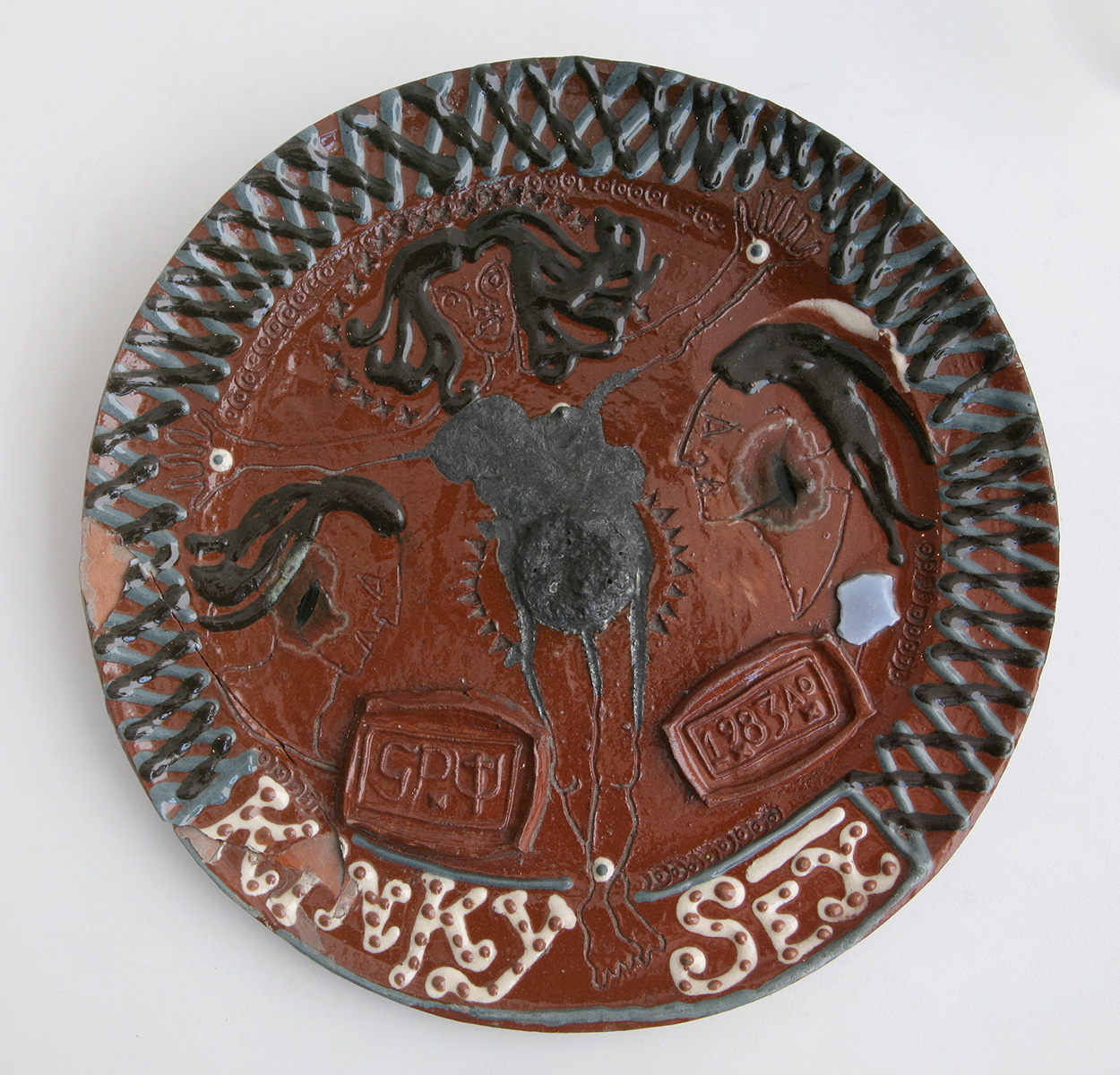 Grayson Perry: The Pre-Therapy Years begins in 1982, when Perry was first working as an artist and then charts his progress to the mid-90s, when he became established in the mainstream London art scene. The exhibition provides a snapshot of a very British time and place, and reveals the transition of Grayson’s style
from playful riffs on historic art, such as old Staffordshire pottery, along with crowns (the mixed media Crown of Penii, 1982) and thrones (Saint Diana, let them eat shit, 1984 – inspired by his fascination with Princess Diana) into a style that is patently his own: plates and vases rich with detail that tell tales of our times and experiences, such as 1989’s Cocktail Party.

Grayson says “This show has been such a joy to put together and to see these early works again, many of which I have not seen since the 80s. It is as near as I will ever get to meeting myself as a young man, an angrier, priapic me with huge energy but a much smaller wardrobe.” 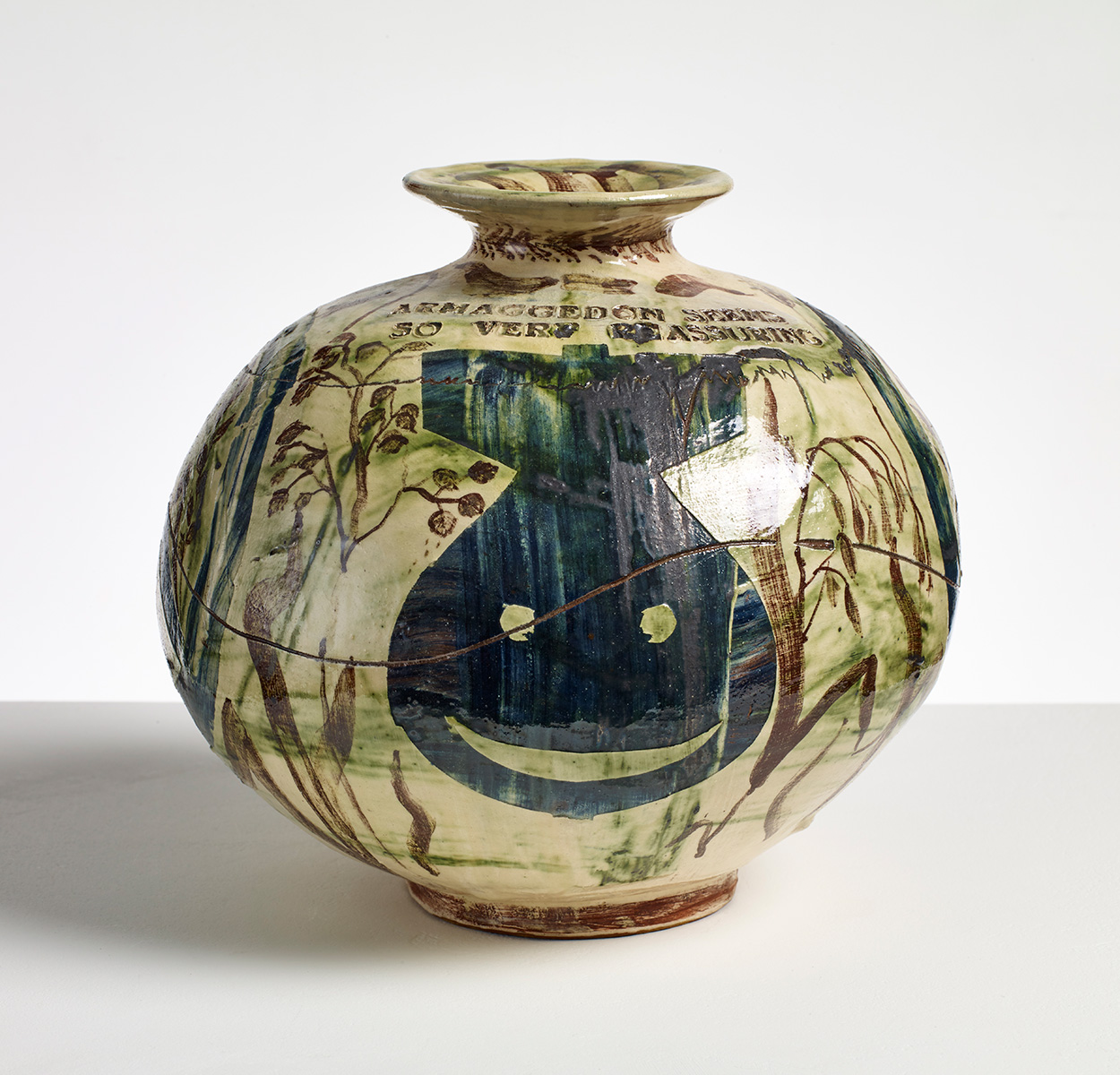 Ghislaine Wood, Deputy Director of the Sainsbury Centre says, “We are thrilled to be hosting this exhibition which brings together such a large collection of previously unseen works by one of Britain’s most recognisable and innovative artists. The Sainsbury Centre’s outstanding global ceramics collection spans
over 5000 years of human creativity and provides a compelling context in which to explore Perry’s deep interest in the medium.”

Exhibition is organised by The Holburne Museum, Bath. It is accompanied by a major new book published by Thames & Hudson that explores, for the first time, Perry’s artistic origins through the artworks that made his name in the years 1982–94.

Planning a day out in Norwich? Other places to visit.